Located in Chelsea around the corner of 8th Ave & 19th St. 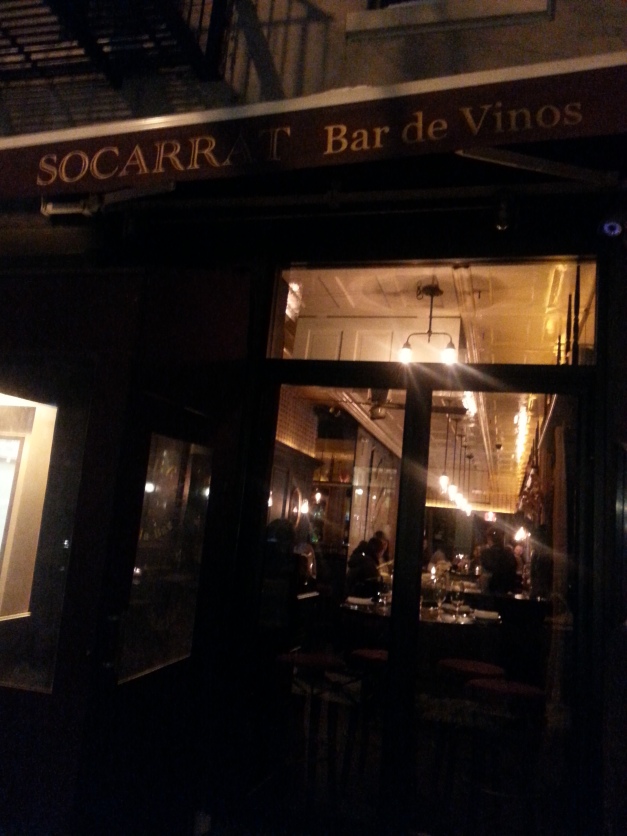 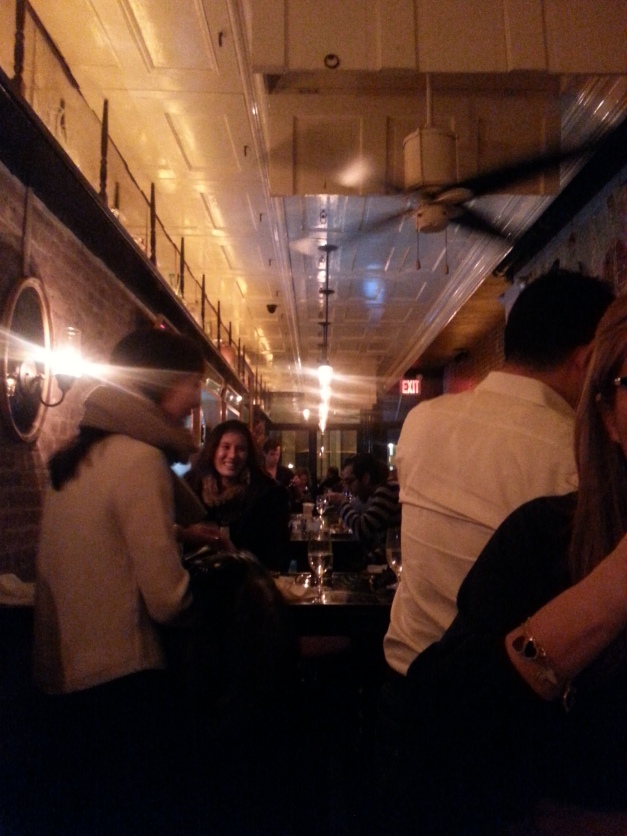 Socarrat Paella Bar’s interior layout reminds me of a “RailRoad” apartment.  I ventured into this place on a Saturday night with a couple of friends who raved that the Paella here was a must try for Paella lovers.  Having eaten Paella in Spain once upon a time.  I figured now was as good a time as any to see if NYC could and would measure up to that experience.

Socarrat offers a nice atmosphere and complimentary coat check which just makes sense considering the limited seating space inside.  Not having to worry about where to place one’s jacket or bag while trying to dine in is an important part of any dining out experience.

We decided to start our dining experience off with some appetizers while looking over which Paellas we were going to try.  After some thought we settled on having white anchovies, in olive oil with black & green olives, sliced plum tomatoes and bacon wrapped dates.

The White anchovies actually tasted better than anticipated and were quickly laid waste to along with everything else on the plate.  That being said, ladies and gentlemen…Behold the power of Bacon son!!! 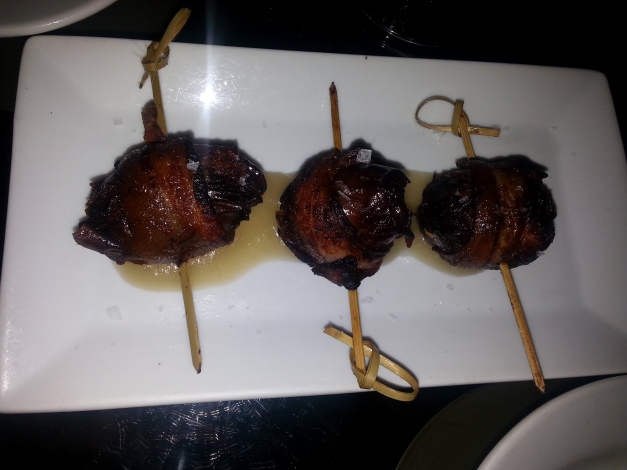 Whoever came up with this creation to quote Epic Meal time is “F’N Smart!!!”  Salty sweet cravings get satisfied and then some when having one of the above bad boys let me tell ya.  Once again, I’ve said it before and I’ll say it again.  Yassum!!!

After toasting with cocktails of Milagros Tequila with lime…. out came our Paellas. 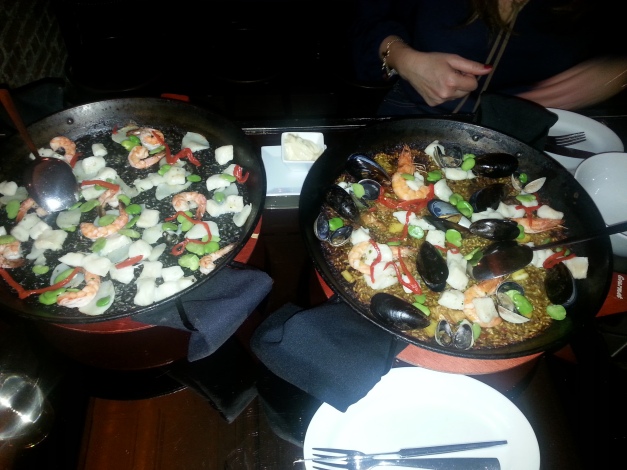 We chose one Paella with Black Rice colored with Squid Ink.  The second Paella had no ink in it.  Both were equally well cooked and very delicious. 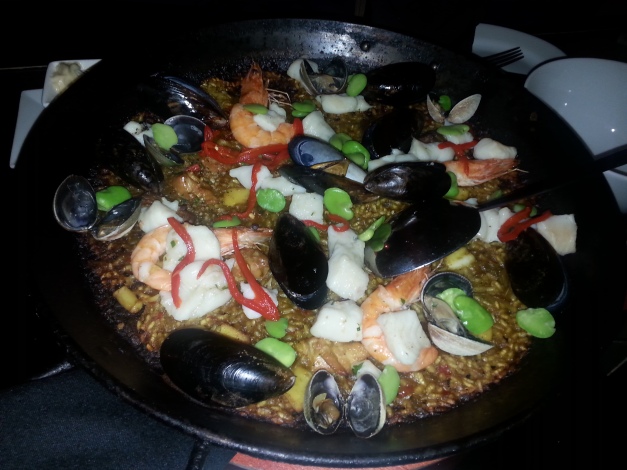 Portions more than satisfied and caused us to have to request a doggy bag. 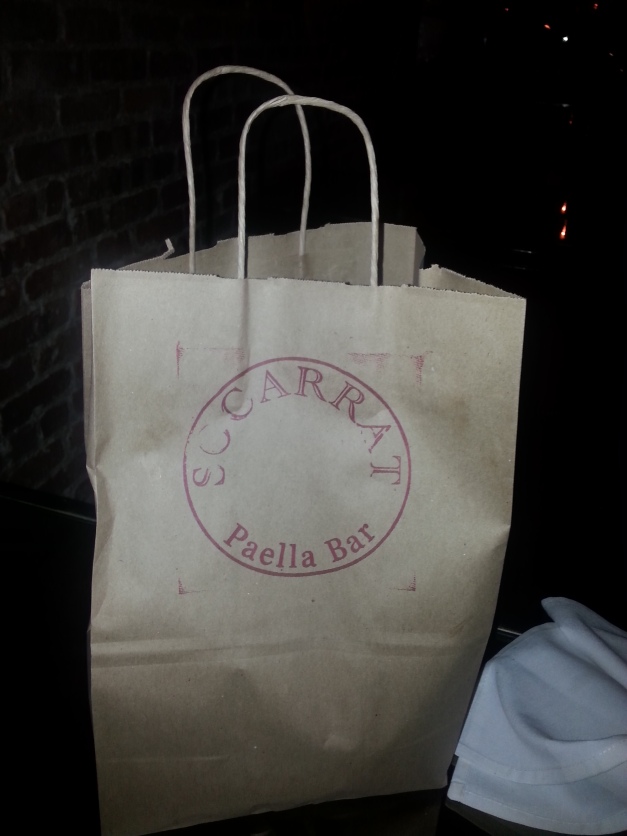 The next day I was able to enjoy some left over Paella that tasted even better the second day especially when coupled with scrambled eggs.  Yes Ma’am!!! It was gooood!!!  Socarrat in terms of presentation and taste gets 4 1/2 dinner plates out of 5. OOOO [. We had a great time dining here and ultimately ended up closing the place down.

While Socarrat is definitely a cool little spot to dine be warned this is not a cheap place to eat.  Our tab for 3 people came in at a bit over $200 with tip.  Drinks definitely contributed to the bill perhaps more than the Paella and appetizers.

Even so, I’ll definitely be back to sample more Paella from Socarrat in the near future.  Till next time this has been the Socarrat Experience 2014 by THEJNSREPORT.

Another weekend has come to an end and as such I decided to treat myself to Spice Restaurant’s Drunk Man Noodles (spicy) w/shrimp and curried chicken puffs. There’s just something magical about broad rice based noodles.  Mmmm Mmmm!!! 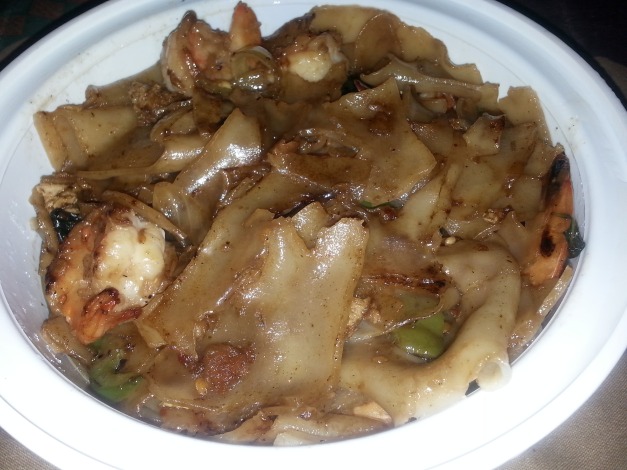 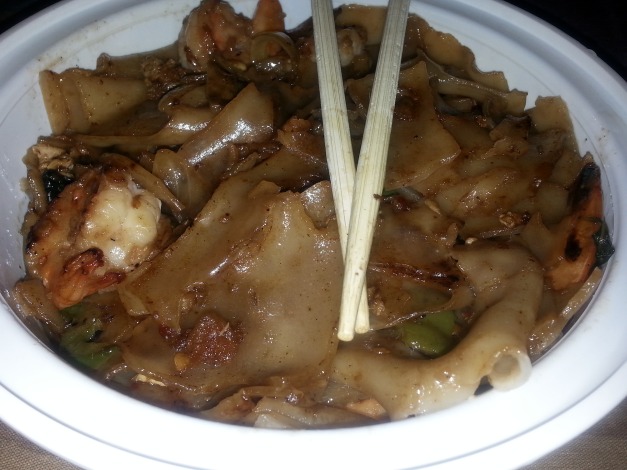 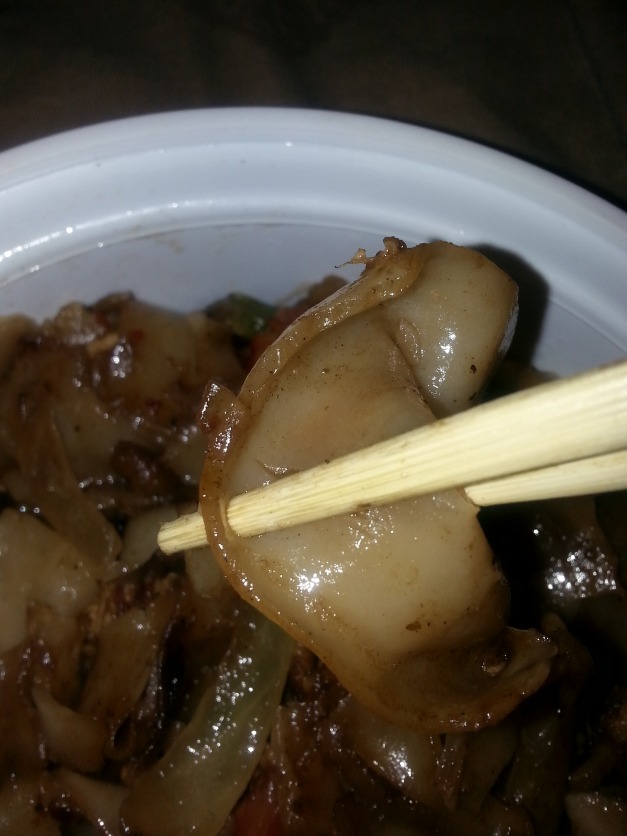 Looks like a Halloween themed curry puff or somebody done  messed up.  In either case it’s gonna get eaten. 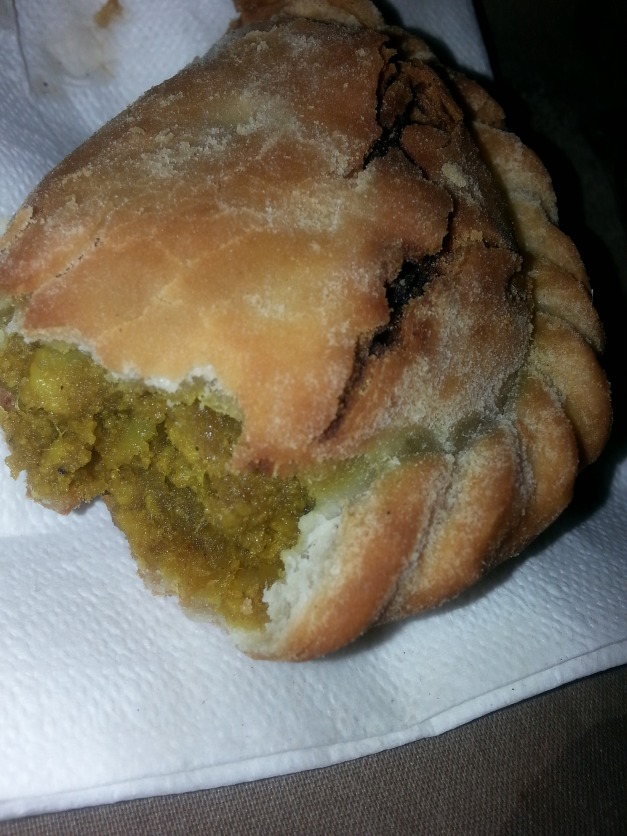 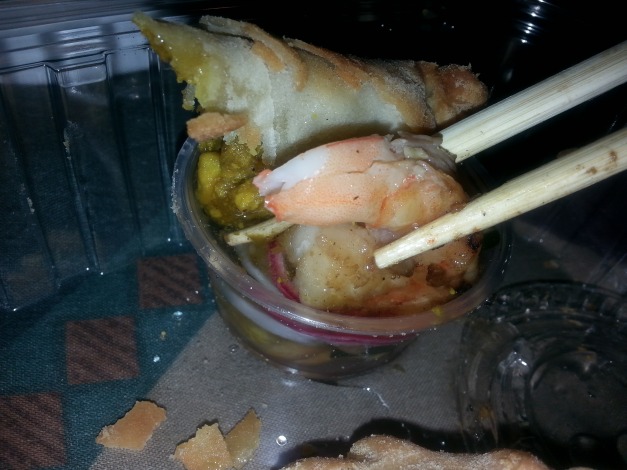 Whether they call the place SEA or SPICE the food is all good.  Best Thai food I’ve had in the city to date.

This Friday I awoke feeling lazy and willing to order out for my first meal of the day.  I decided I should first go to the fridge to see if I had anything I could make that was relatively easy and quick.  I looked in the freezer and to my happy surprise I found I had several packages of Spinach stuffed Tortellini.

I grabbed the Tortellini and frozen Latkas (Potato Pancakes) and Several Hash Browns.  After bringing a pot of water to boil with some salt and canola oil, I added the stuffed Tortellini’s and heated up a griddle for the Latkas and Hash Browns.  Once the Tortellini’s were done I strained the water from them and got my bowl and plate.

I felt like I should add something to the Tortellini, but seeing as how I didn’t have any Pesto or Cream Sauce available I added a little spaghetti sauce to them .

With the Hash Browns and Latkas done I placed them on paper towel and added a little ketchup as they required. 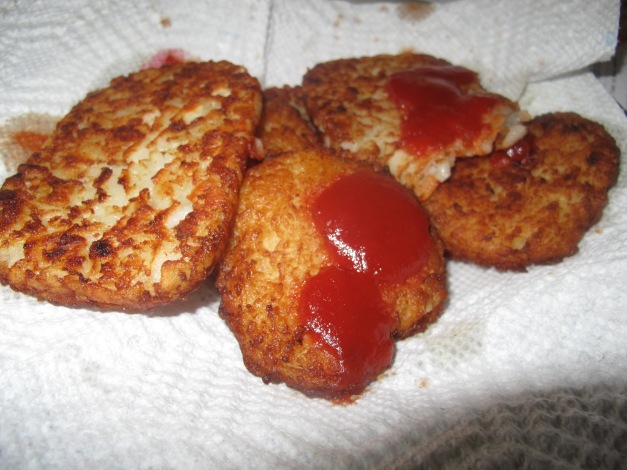 Once my brunch was gone, I went about the rest of the day relaxing from a taxing week.  When dinner time rolled around I was feeling in no mood to cook and so I made a choice between Pizza and Chinese for dinner and went with the latter.  This is my little take out dinner splurge below. 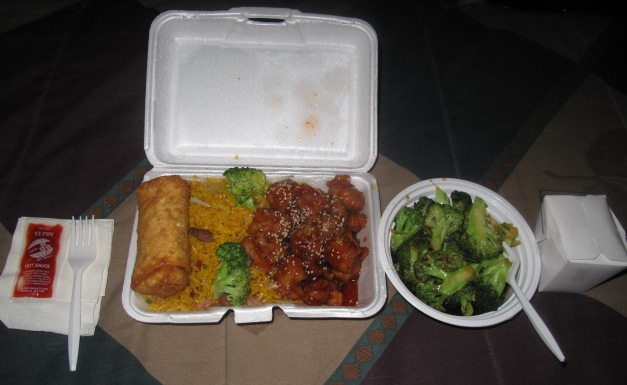 That right there is Sesame Chicken with Pork Fried Rice, an Egg Roll accompanied by sauteed Broccoli &  small White Rice.

Yes that is a Chicken wing slipped in there.  That’s what the hot sauce was for.  All I see is magnificence below. 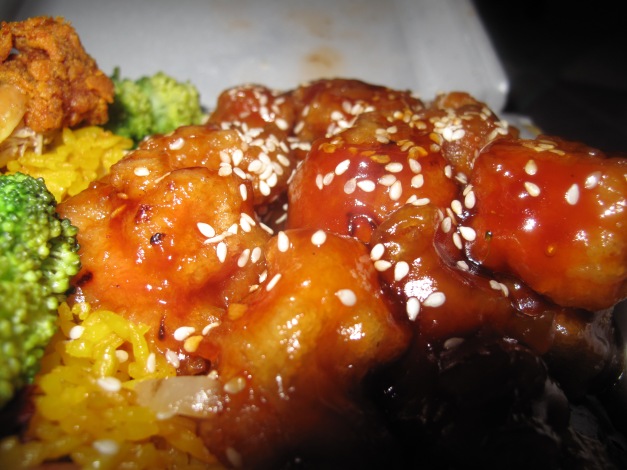 Now time for some of that Egg Roll.

Feeling the need to touch my greens I shifted my attention towards the Broccoli bowl.

Now that’s what I call a Sea of Green.  Wanna taste it?  Here put your face up close to the screen and close your eyes…

The Sesame Chicken was good.  I’ve really only had better in more recent memory eating the same meal at Alpha Asian Fusion Restaurants.  The difference between this version I had tonight and Alpha’s is the size of the Chicken chunks and the amount of floured batter.

The floured batter is far less prevalent with Alpha’s adding to it’s quality where you can really taste the chicken chunks versus this one which isn’t bad but clearly has a bit more of the floured batter around the Sesame Chicken which is nothing more than General Tso’s Chicken with Sesame seeds sprinkled on them.  Even still I did enjoy bite after bite… 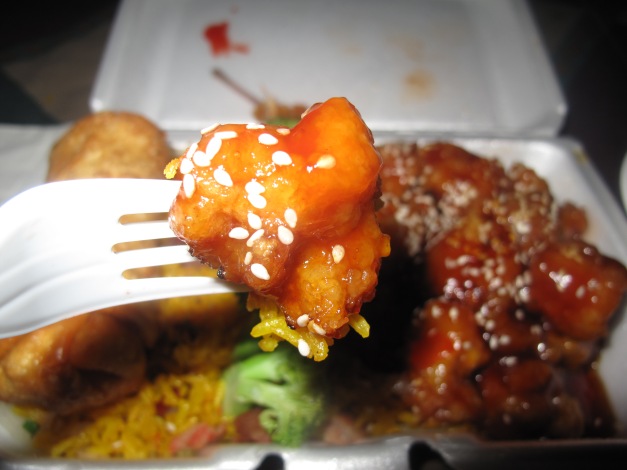 Of course with a meal like this I needed some liquid to wash all this down and so I turned to my Big Cup full of water.

It was a good end to a good meal.  The news and a movie put me to bed shortly after.  Till next time this has been Friday Meals by THEJNSREPORT.