Welcome to THEJNSREPORT’S: The Final Heist

In what will go down in history as the most effective and blatant modern-day fleecing of America outside of the Federal Reserve & “Income Tax”, Floyd “Money” Mayweather & Conor McGregor demonstrated to the entire world yet and still, why America is the greatest nation on earth.  Mayweather & McGregor gave the fans of both MMA & Professional Boxing what they wanted to see.

All the subplots attached matter least when we take into account that those subplots would never have come to fruition if the amount of money to be made didn’t rival that of the largest fight purse ever to date.  McGregor, I believe truly believed his physical talents from his MMA career would be more than enough to beat the undefeated and aged legend Floyd “Money” Mayweather.

After having watched the fight for a second time from start to finish its abundantly clear that the viewing public were willfully had.  Yes this fight was more entertaining because it went longer than anticipated.  Mayweather also fought counter to his known defensive brilliance walking Conor McGregor down while taking his best shots  & not being phased.  He did show however, that the 2 year layoff as well as “Father Time” had indeed caught up with him to a certain degree.  Floyd turning has back repeatedly to McGregor had myself & family scratching our heads if not screaming at the TV, “What the hell are you doing Floyd?!”

Skip Bayless thought (much like all the classic stereotypical haters of greatness in their delusional world) that McGregor would have beaten Floyd if not for stamina issues.  Last time I checked stamina is part of fighting and the book was already out on McGregor that if you can get him fatigued he isn’t as invincible as he seems.  The “game plan” Mayweather Sr. & Junior pulled off shows everyone yet again just how brilliant and beyond his contemporaries Floyd actually is.

Floyd didn’t need to train as hard as say for a Tripe G or Canelo but against a novice boxer 12 years his junior known as a “Knockout Artist”, He slowed down enough to make Conor McGregor appear far more competitive than he actually would have been had he fought Floyd several years ago.  Despite his slowing down at 40 years of age Mayweather’s stamina was vastly superior to that of McGregor who literally had to be saved from being put down on his “shield” by a vintage Mayweather drubbing in which McGregor could only stagger and absorb shot after unanswered shot to the face with Floyd prepared to grant McGregor his wish.

Pride, money, and legacy were all on the line for Mayweather who stood the most to lose but the most to gain with another staggering Mollywop of a pay-day looming for dispatching a cross promotional fighter of legends from two different worlds of combat sports.  Where else could such a spectacle take place in which both combatants would be paid well in excess of $100 million each?

The blueprint of “Money” Mayweather will be studied for years to come and whether another superstar fighter is able to capitalize to the extent that Floyd “Money” Mayweather has remains to be seen.  One thing appears to be sure at least if you believe Mayweather’s post fight interview in which he stated that was his last fight.  He pulls of his final heist as a master class lesson on boxing and saunters off into the sunset having accomplished his goal of 50 and 0 with more total prize money won than any other athlete in the history of sports to date without any endorsements to speak of.

Haters will decry this last fight as a “farce” because they didn’t get to see their ultimate wet dream come to fruition i.e Floyd losing a boxing match.  Fight fans and purists will recognize that this was everything they hyped it up for and worth every penny charged especially when considering how much they hated the Mayweather – Pacquiao fight.

Lastly, everybody won.  The fans won getting to see the fight they wanted in a timely fashion.  Mayweather won both at the bank and inside the ring.  McGregor won with his largest pay day ever outside the sport that’s made him internationally famous & wealthy even though he lost the fight.  Boxing won because for now the argument about whether an MMA fighter could beat a professional boxer in the boxing ring has been definitively answered, and the IRS won because they will receive their cut of all that generated fight revenue plus the back taxes owed.

MMA fighters won because they now have another avenue opened up to them to make potentially way more money fighting at another discipline if things don’t work out in MMA.  It’ll mirror WWE wrestlers who ended up leaving the WWE to pursue a career in MMA.  Either way it seems everybody won.  Again I ask you where else could such things happen?  Answer… only in America.

The other day while listening to ESPN I heard someone say that they liked the fact that Pro Tennis doesn’t have salaries for the players or guaranteed contracts like other pro sports because it means the players have to go out and earn it every time they take the court.  I didn’t like the comment and thought I’d put up a poll and see if more people share that sentiment.

Are pro athletes spoiled, over paid, egotistical narcissists unworthy of being paid for their labor unless they play and win?  Before you answer consider what you do for a living. Do you feel you deserve a guaranteed contract/salary for what you do?

Coach is seething mad under a strained composed face with the outcome of the game being a picked up flag and Panthers win. 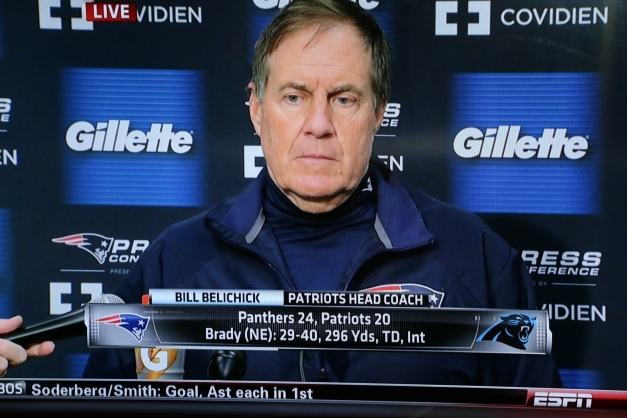 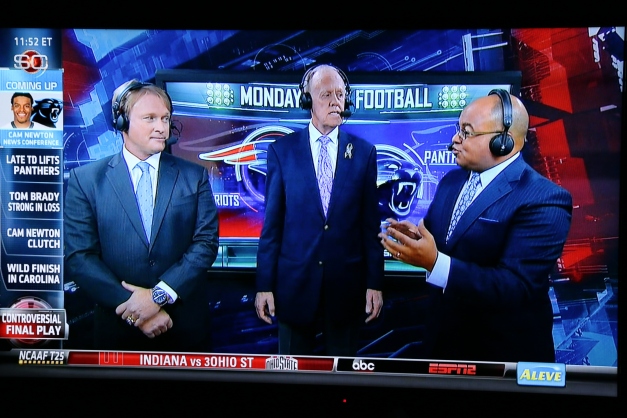 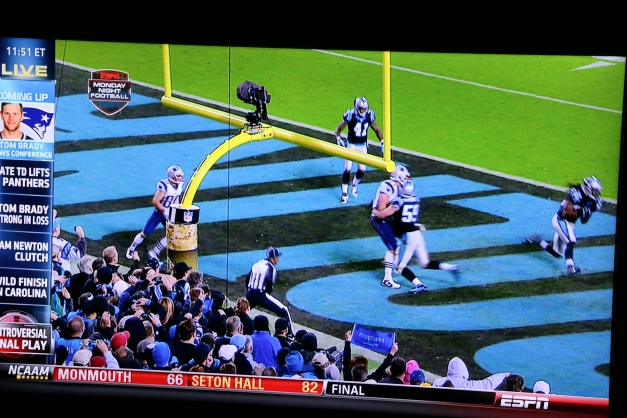 Way to step up and battle Brady score for score.