This Friday I awoke feeling lazy and willing to order out for my first meal of the day.  I decided I should first go to the fridge to see if I had anything I could make that was relatively easy and quick.  I looked in the freezer and to my happy surprise I found I had several packages of Spinach stuffed Tortellini.

I grabbed the Tortellini and frozen Latkas (Potato Pancakes) and Several Hash Browns.  After bringing a pot of water to boil with some salt and canola oil, I added the stuffed Tortellini’s and heated up a griddle for the Latkas and Hash Browns.  Once the Tortellini’s were done I strained the water from them and got my bowl and plate. 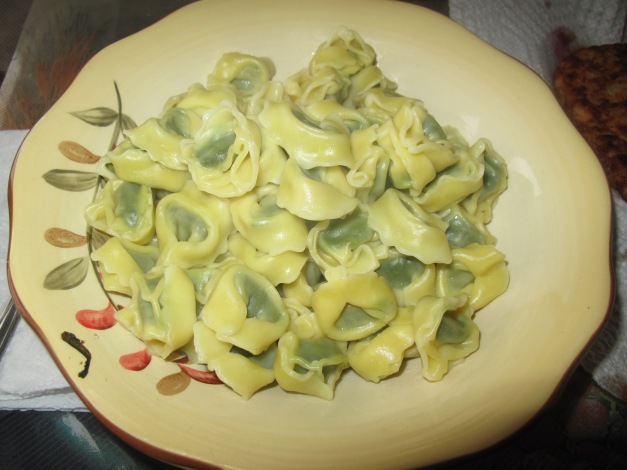 I felt like I should add something to the Tortellini, but seeing as how I didn’t have any Pesto or Cream Sauce available I added a little spaghetti sauce to them . 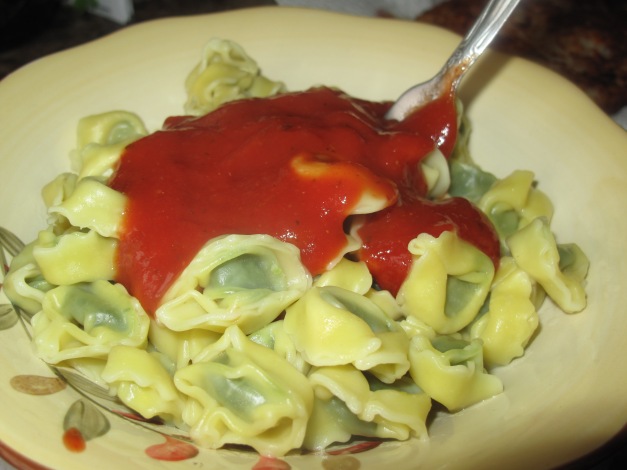 With the Hash Browns and Latkas done I placed them on paper towel and added a little ketchup as they required. 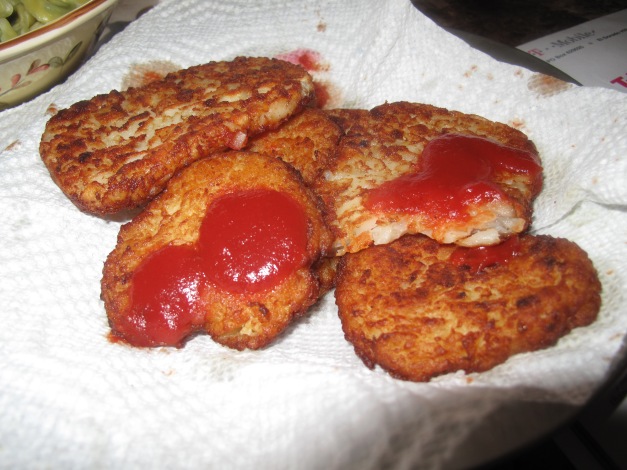 Once my brunch was gone, I went about the rest of the day relaxing from a taxing week.  When dinner time rolled around I was feeling in no mood to cook and so I made a choice between Pizza and Chinese for dinner and went with the latter.  This is my little take out dinner splurge below.

That right there is Sesame Chicken with Pork Fried Rice, an Egg Roll accompanied by sauteed Broccoli &  small White Rice.

Yes that is a Chicken wing slipped in there.  That’s what the hot sauce was for.  All I see is magnificence below.

Now time for some of that Egg Roll.

Feeling the need to touch my greens I shifted my attention towards the Broccoli bowl.

Now that’s what I call a Sea of Green.  Wanna taste it?  Here put your face up close to the screen and close your eyes…

The Sesame Chicken was good.  I’ve really only had better in more recent memory eating the same meal at Alpha Asian Fusion Restaurants.  The difference between this version I had tonight and Alpha’s is the size of the Chicken chunks and the amount of floured batter.

The floured batter is far less prevalent with Alpha’s adding to it’s quality where you can really taste the chicken chunks versus this one which isn’t bad but clearly has a bit more of the floured batter around the Sesame Chicken which is nothing more than General Tso’s Chicken with Sesame seeds sprinkled on them.  Even still I did enjoy bite after bite…

Of course with a meal like this I needed some liquid to wash all this down and so I turned to my Big Cup full of water.

It was a good end to a good meal.  The news and a movie put me to bed shortly after.  Till next time this has been Friday Meals by THEJNSREPORT.