Welcome to THEJNSREPORT’S: Zendaya & Giuliana Rancic (I am Not My Hair)

I unfortunately wasn’t able to catch the Oscars till Monday due to prior engagements on Sunday night.  However, when I heard of the latest controversy involving E! Fashion Police co host Giuliana Rancic’s comments I felt like here was another topic to address.  I’ve seen the many times in life where the image of a black woman is torn down and made to feel less than or ugly for the benefit of racist ignorant perspectives.

Having several sisters I know very well, how much this issue affects them personally when it comes to hair.  And to be clear hair issues aren’t exclusive to black women, afterall there is the term “Bad Hair Day”.  I’m sure it’s pretty universal that most if not every human being has had at least one “bad hair day”.  All that said, this issue isn’t about a bad hair day but simply the disparaging, disrepectful, and stereotypical comments made by Giuliana Rancic regarding a young black woman in Zendaya Coleman on the red carpet at the Oscars.

Rancic stated that she felt like Zendaya’s hair smelled like patchouli oil and weed. In my opinion those comments are just a reflection if not reminder of the fact that the more we think times and things have changed, the more they’ve stayed the same.  Racism, prejudice, and stereotypes aren’t going anywhere.  Neither can the fight against those things go anywhere.  We as people must continue to fight against these divisive issues, call them out when we see them, and not give a pass or an “Oh she didn’t know any better”.

It also reminds us of the power of the media platform and social media.  Those comments uttered by Rancic were heard by millions of people and think of what those comments would/could do to the self esteem of young Afro American girls, teens, & young women not to mention the impression of black women and beauty in general when they’re broadcast on television.

Zendaya’s hair was flawless and beautiful just as she is.  It is representative of the power, grace, strength, & beauty of black women.  The comments offered by Rancic came off as jealous, ignorant and stupid if not racist yet far more sincere than her Paula Deen impression of an “I’m sorry I got caught speaking what I really feel on air moment”.

While I could take the low road and let loose a slew of offensive comments about Rancic, I think Zendaya’s response to the unprovoked, and unwarranted attack are far more appropriate.  They exhibit the intelligent thoughts  of an eloquent young black queen speaking truth to a bitter woman that likes to throw rocks at her throne.

What are your thoughts on this?

While flipping through the channels in a moment of boredom I happened just out of curiosity to stop on MTV Jams when this ridiculous example of what Hip Hop is not, came on.  “Commas” The whole song is bragging about what they don’t have.

We immediately got a flash back of a horrible spoof commercial we’d seen from Optimum Cable from a year or so ago in which they had “Hip Hop” skeletons dressed up like the fools in the “Commas” video standing around selling the image of showing out “bling” as the way to attract customers from the inner city projects.

The Optimum commercial, we both found uninspiring and insulting and yet somehow L.E.P Bogus Boys managed to top that impression with their track Commas.

What we would call “Now & Later rappers” one can’t even call rappers because you need to at least be able to say something somewhat intelligent or clever to get ears to perk up.

For those of you out there of our generation (meaning 30 somethings who grew up during the golden era of Hip Hop and real talents) to witness the end of that era and the beginnings of today’s generation of “Hip Hop” artists, L.E.P Bogus Boys definitely picked the right name for their group. Bogus

In short L.E.P Bogus Boys are a bunch of wannabe non talent having jokers who’ve  made a song that means little and adds nothing to Hip Hop as an art form other than to promote stupid stereotypical empty materialistic B.S.

The video for Commas furthers this by going back to the same ole formula of showing a bunch of fools with all this gawdy jewelry on talking about they need commas after their commas throughout the track while showing examples of unrealistic unattainable displays of wealth.

In one part of the video some female is in a bathtub filled with stacks of money and then shifts to a scene in a kitchen where cereal has diamonds being poured onto it as if the diamonds were the milk.

It’s all fantasy of course.  However, the message we took from this heinous display is  one, they don’t have a fraction of this shit they’re rapping about and two if you are dumb enough to believe them then buy their album buy their song so that while they rap about it now they can hope to get it later. “Now & later” rappers.

Then you might just see L.E.P Bogus Boys on MTV Cribs faking it once again showing a mansion that they don’t own, cars they can’t afford to put gas in, and others will think that’s how you become rich.  All this without adding anything of value or substance to society or the people they are targeting with this utter basura they call music.

This is Lil Wayne’s hustle now.  Lil Wayne isn’t fit enough to even lick the shoes of juggernaut greats such as Tupac & B.I.G, let alone go bar for bar with  the likes of Nas, Em, Big Pun,Talib Kweli, Jay -Z, Scarface, or even Lupe Fiasco.  However, we understand “the show” must go on and so this is the only thing they know how to do and the only method of selling records to youth who have forgotten, or are too young to recall, what real Hip Hop is.

This is exactly the point made by Kendrick Lamar in Big Sean’s “Control”.  When they rap about being so great because of money and bling but have no real skill, and aren’t saying anything, we call that being utter frauds posing as artists. Support the real artists we say not this fraudulent crap!

In the last post on this subject, I was optimistic that my appeal for more selflessness vs selfishness would have some impact.  Ladies and gentlemen, in this 2013 “year of our lord” I give to you evidence yet again that we have much more work to do.  In a joint collaboration cross over project with FrozenRope Photography.wordpress.com we present this artistic take on how comic like we are as human beings.  I give you Photo Effects II: The Selfish Part II 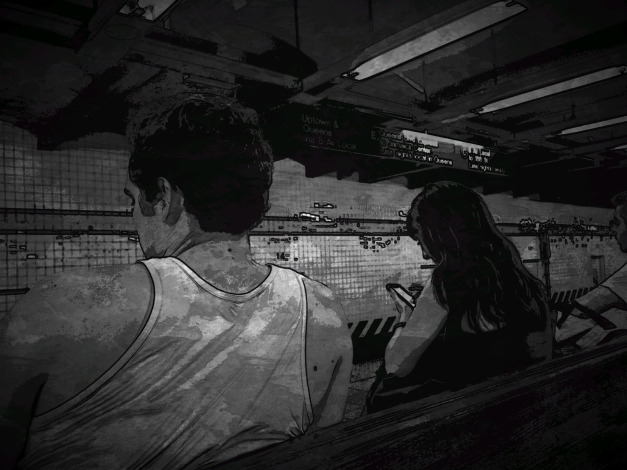 Waiting for the Train Man.

Makes no difference where, selfishness travels, in this case from the train to the bus.

All Images are the property of PalindromePhotography.wordpress.com (c)2013

Seeking Solace in the Horizon of Life

Can't have one with out the other!

Into the Light Adventures

BY GRACE THROUGH FAITH