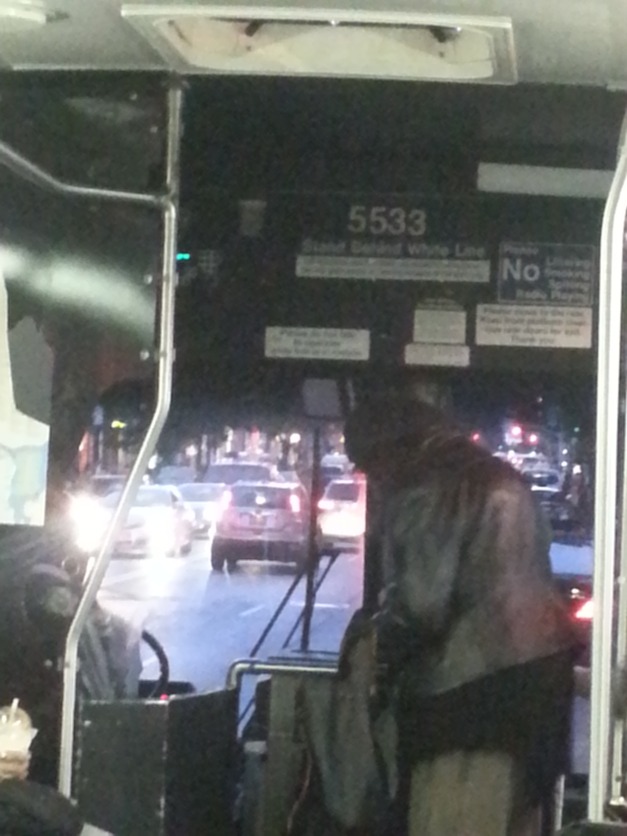 Maggot behind the wheel. It’s dangerous to have them driving the public around the city.

The type of bus driver I’m referring to in the picture is the type that would delay you when you need to get some where by sitting at a stop for 5  to 10 minutes.  This type of bus driver doesn’t pull all the way next to the curb but rather stops out in the street making you come to them.  As soon as you board the bus, steps on the gas so you go flying while trying to find a seat.

Basically there were two  BX14 buses one behind the other at the Union Sq stop at University Place.  The bus in front parked at the curb where it’s supposed to stop for the customers.  This bus was behind it double parked in the left lane of the road.

It’s not rocket science to see that doing that blocks both lanes of traffic with two big ass buses heading westbound on 14th street.  The woman you see above yells at us oncoming riders to “hurry up”  and that we can see she’s blocking the street and that there’s another bus in front.  “You see that bus there, why don’t you take that bus”!?

I immediately lost my composure.  I’m like first off who’s driving this bus?  That would be you.  Who told you to park your bus in the second lane of traffic? Answer: Your own dumb ass.  I’m going to the bus closest to me which was this particular bus she happened to be operating.

Question: Why wouldn’t you stop the bus directly behind the bus in front at the curb?  Answer: Again because she felt like it.  There was no legitimate reason for her to block the traffic lanes as there was plenty of room to pull behind & that particular bus, which started  to pull away by the time myself and several other passengers got to this bus.

I told her to do her job and that she had some nerve yelling at us for her stupidity.  This is what I paid a fare increase for?  A bus driver with an attitude who much like most of the other bus drivers in the city does what she wants when she wants hoping no customers speak up.

If I would’ve taken her advice, the bus in front would have pulled off and left me standing there pointing at the bus behind it much like what’s happened many times before.

One can’t begin to describe the frustration felt in those instances in which the bus operator smiles vindictively having left a customer chasing after them.

You just have to throw your hands in the air in disbelief. It’s public service afterall & customer service matters especially with the costs associated constantly increasing.

For my aggravation I said this woman wins the  “Maggot of the Day” & “Gas Face” awards.  I snapped her picture on my way off the bus so apologies for her face not being fully recognizable.