To start day 4 I decided to have some fruit as well as… you guessed it two Psyllium Husk capsules. 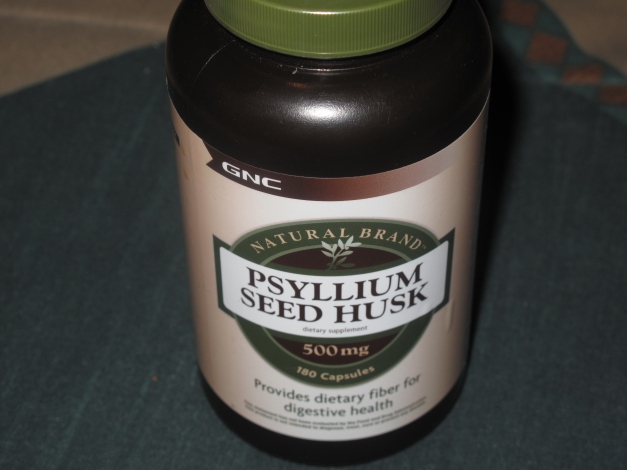 I had a tangerine, a baby apple, and honey turkey with extra sharp cheddar cheese and Mayo on Ciabatta rolls. 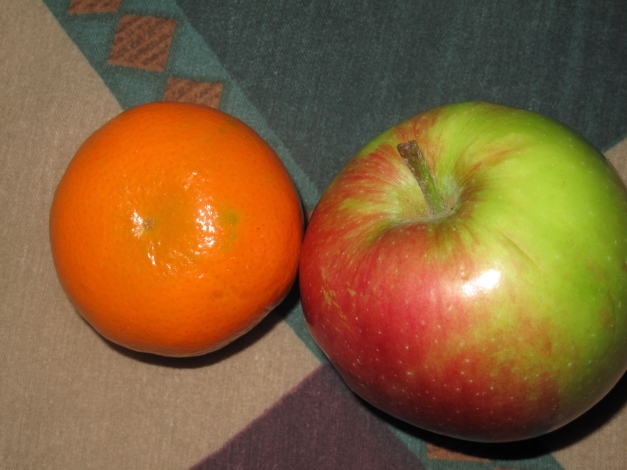 The baby apple was so sweet.  I really could eat one every day. Tangerines are OK but not my favorite.  I actually prefer oranges. 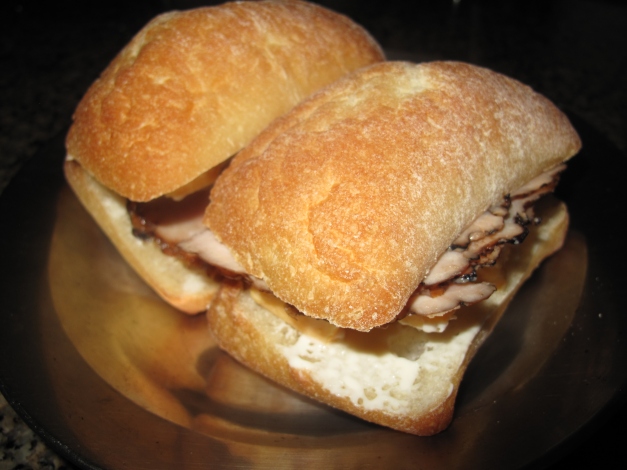 The sandwiches were perfect in their balance with the mayo to help the dryness of the ciabatta rolls.  This by far is one of my favorite cold cut sandwiches, though sometimes I’ll substitute mustard for the mayo.  Next time I’ll try this with some aged Gouda and see how that works out.  Anyway these twins didn’t stick around for further questioning.  And like that they were gone.  Several hours passed before it was time for lunch. 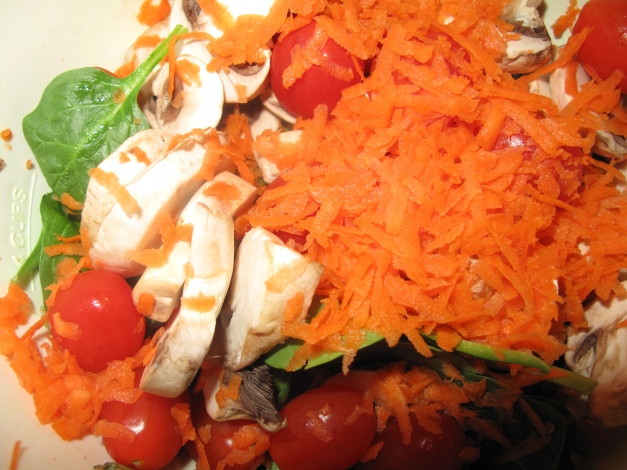 Lunch time of course called for a return to eating my greens and so I once again turned to spinach as the base of my Salad.  Next I began to add the colors.  What you see here is chopped mushrooms, grape tomatoes, shredded carrot and spinach.  As a dressing I went with a fat free Italian.  Is there really such a thing? 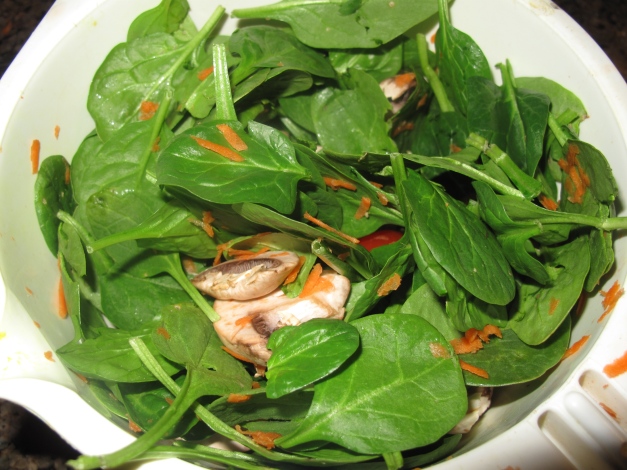 I tossed the salad LOL!  I took a look and saw that like some sort of green maelstrom the mushrooms and tomatoes as well as some of the carrots were swallowed up and hidden.  Still I felt the salad needed something else added to it and so…I went to the fridge and pulled out falafel mixture I had left over and began frying up some falafels.  😀 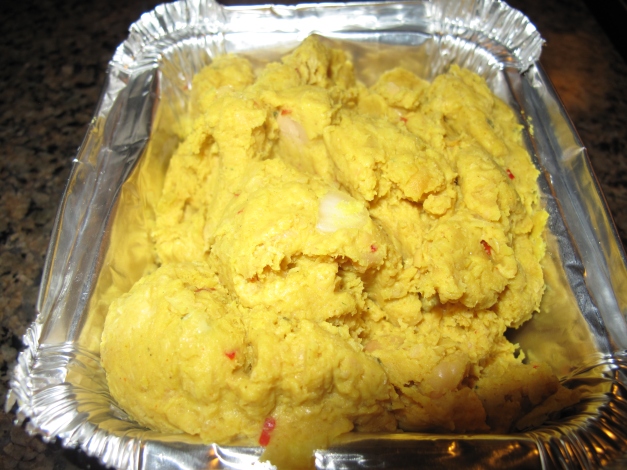 I looked at the trio and thought to myself one little, two little, three, little Indians.  LOL!!! 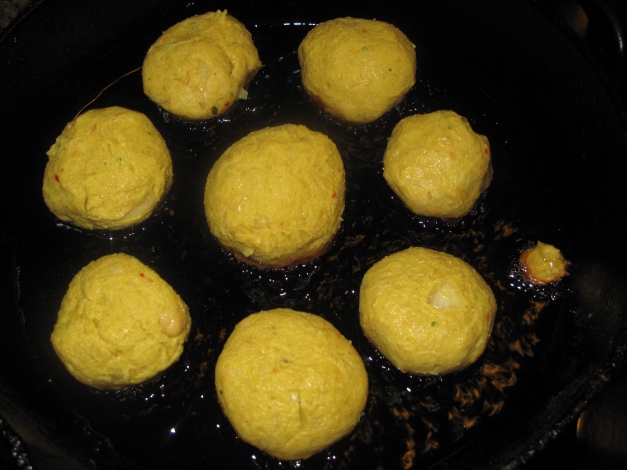 A little char is ok 😉

I finished the falafel balls on their sides and carefully removed them from the oil.  I decided to add several of these dark honey golden colored “deliciosities” to my salad. 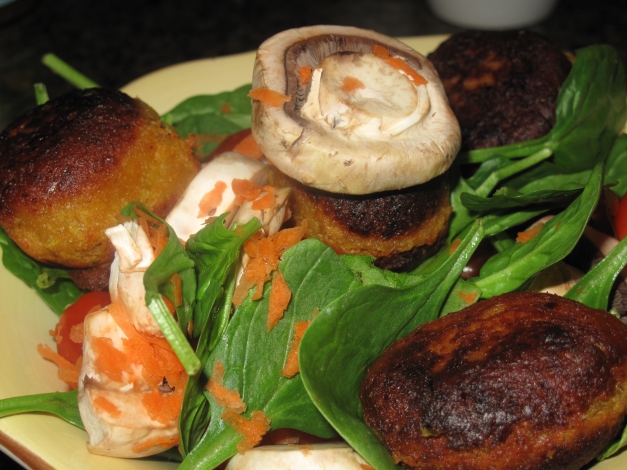 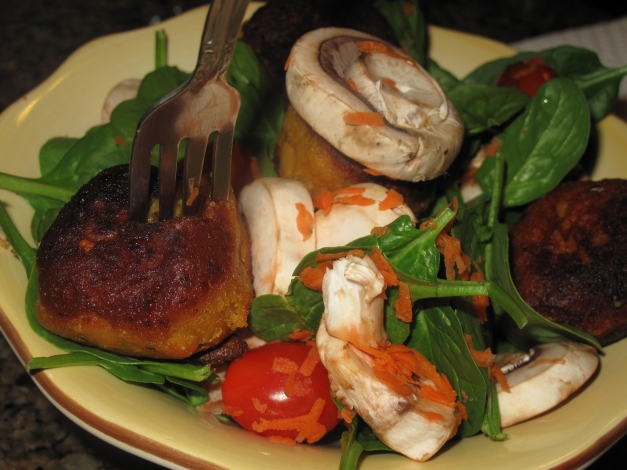